Introduced c1926, the MkVI (mk6) was now lighter than the mk4 and came with blued tubes and a ND eyepiece filter but kept the same awkward format of two different magnification eyepieces. The MK6 was solid and made with thick gauge brass, and over-engineered when compared to its successor, the Scout Regiment. For this reason well-maintained, by armourers, MK6 telescopes remained in service and saw conflicts as late as 1970/1980.

The quality of optics from this Broadhurst Clarkson is superb, producing a very sharp high contrast image with very accurate colours. The magnification of this telescope is just above 15x but below the 20x of the scout regiment. However, with such a sharp bright image this would have been ideal for the sniper or observer to identify enemy targets and gather intelligence accurately.

This telescope is an excellent usable spotting telescope in its own right; the optics are excellent. It would also make a great addition to any antique or Military collection. Furthermore, this MkVI would be suitable to complete a British & Commonwealth Nations No4T chest as it was not uncommon to see the MKVI added to make up the CES for the No4T Sniper kits. When supplied with No4T the extra high magnification eyepiece and the leather pouch was usually omitted (as with this example).

We have now fitted new gland linings and also adjusted the drawers so that the first two have a firmer extension with the focusing tube having the desirable easier smooth looser action, while still holding focus position. The drawers and glands fit so well they are more or less airtight. There is a generous amount of bluing remaining on the drawers combined with age and service-related patina. There is a very slight highpoint along the length of the seam line of the first drawer; this can be felt slightly on extension/retraction, but it is original to the telescope.

The leather cladding has two military marks, the first is a large stencilled number '69' in black ink and to the other side a smaller stencilled letter 'R' in white paint. We have not identified the significance of the letter and number combination.

The telescope will have seen service during WW2 and later conflicts. There is general wear, scuffs and marks, all commensurate with age and service. The stitching is in good order on the telescope body and sun shield. We have rebonded one edge on one of the strap loops to reinforce a small area of loose edge stitching. The leather end caps are well worn, and we have also rebonded the strap loop on one end cap.

Both external and internal optics are original, correct, clean and produce an incredibly bright sharp and colourful image suitable for use as a critical spotting scope as per original issue. There is a tiny chip to the very outer diameter of the achromatic lens assembly, but this is typical of the original flint glass lenses and has no effect whatsoever on the image quality.

The optics are outstanding we can decern the roman numerals at 1200m (1300yards) on a church clockface. 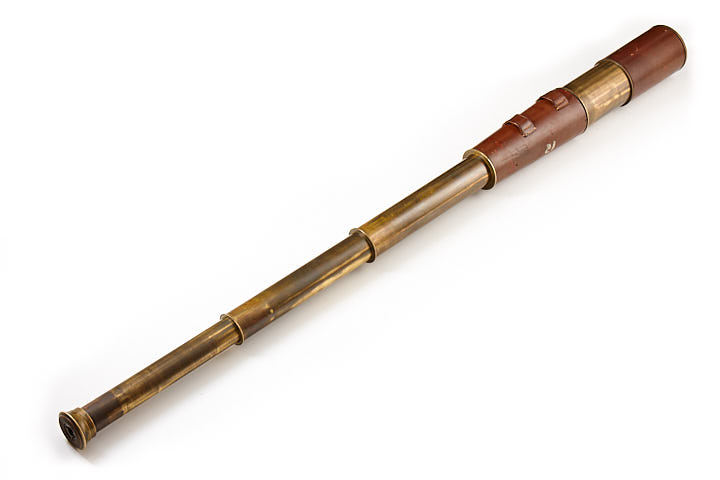