Finely carved antique netsuke, unsigned genuine Meiji period tsuge (boxwood) katabori netsuke with provenance. Of an extraordinarily unique design not seen before; an elderly toad or ‘gama’ standing robed in a Japanese Kimono and Obi resting on a cane held in his right hand. With a subtle sense of movement and a satisfying feel in ones hand the netsuke-shi has created a charming and amusing netsuke.

The elegant carving reveals the toad's weight and balance placed over the walking cane and resultant matured hunch. Standing 2 ¼ inches high the intricate netsuke is carved from a single piece of light tsuge boxwood with applied stain and eyes inlaid in a carved dark cow horn.


During the Meiji restoration period, the netsuke’s original definition of a functional accessory to the traditional Japanese Kimono became less applicable as the western dress was quickly adopted. The netsuke’s form and himotoshi design, with one larger hole, was no longer required to hide the knot or be shaped in such a way the cord originating from the ojime and sagemono (or inro) could be freely threaded and the netsuke tucked above the obi. This resulted in elevating the carving of the netsuke to a solely fine art form of immense artistic merit and many fine netsukes, such as this one, were carved during the Meiji period.

Superb condition and with such tactility the netsuke has benefited from the formation of a rich age and handling patina with commensurate smoothing. 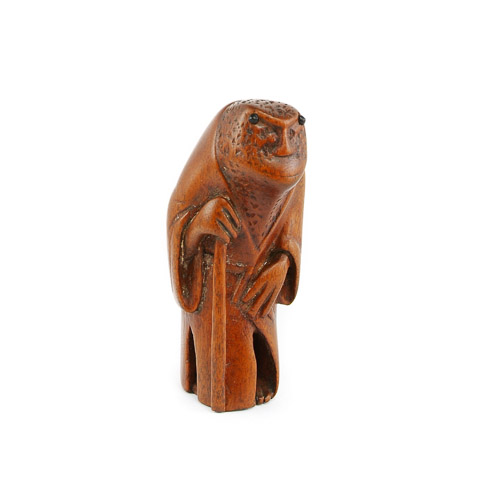 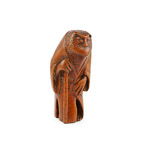 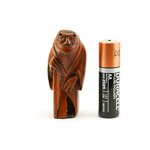 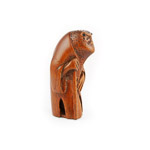 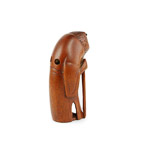 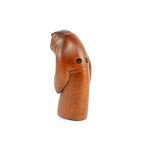 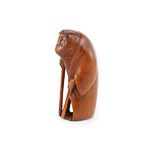 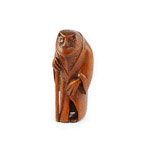 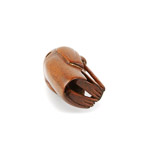 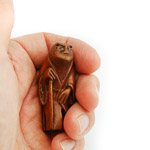 From the private collection of the late Dermott Levins; accomplished oriental collector, the majority of whose collection was procured from distinguished London galleries and auction houses during the mid-twentieth century. Those of particular note: