The eighteen Luohan (or Arhats) are set amidst enamelled lingzhi clouds on a white ground. The heavily relief moulded eighteen Luohan are uniquely identified by their various attribute or engagement in activities:


Taming Tiger Lohan Pindola can be seen riding his ferocious tiger, enamelled in yellow, and with his precious ring held high and highlighted in gilt. Raised Pagoda Lohan Nandimitra with a seven storey pagoda raised above his head, enamelled in coral red, with seven gilt highlights. Laughing Lion Lohan Vajraputra can be seen with a playful lion cub, enamelled in light green, leaping over his shoulder.

This is a good example, well moulded and enamelled. Although without the entire stopper, it does benefit by retaining its original red stained bone spoon mounted within rolled cork; preferred over a later replacement complete stopper.

Minor use related wear commensurate with age and a tiny chip under the rim of lip (picture 9). There is also a very small fired porcelain fill to the rim that appears original to the snuff bottle, all unobtrusive.

A similar example was seen at The Ruth and Carl Barron Collection of Fine Chinese Snuff Bottles: 16 September 2015, Christies New York, Rockefeller Plaza: lot 309. This indicates the complete stopper would have been porcelain and although reticulated, of note is the identical form, enamel palette, gilt, neck shape and moulding. 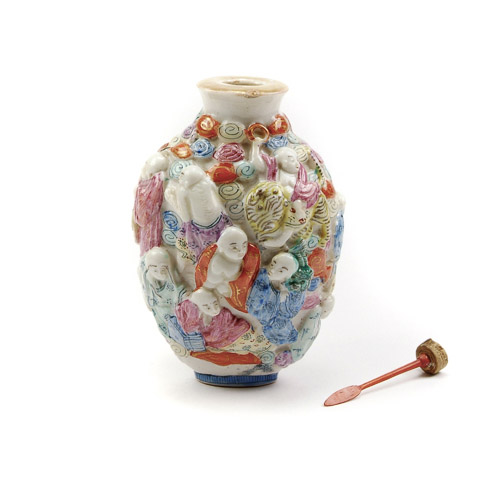 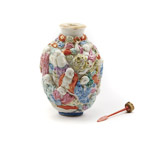 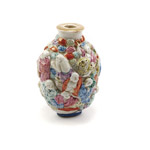 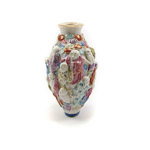 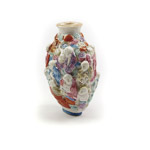 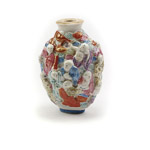 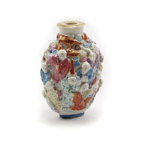 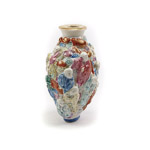 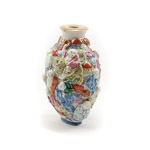 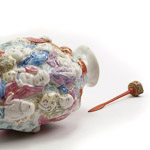 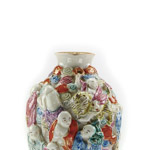 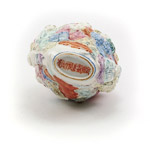